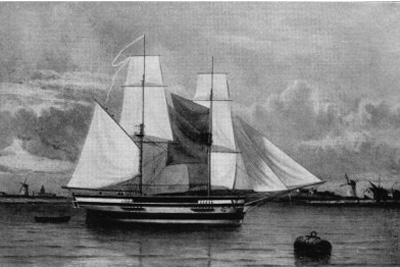 The Lady Nelson was originally intended for work as a cutter in the Thames and was constructed with three “sliding keels” (centre boards) to enable her to navigated shallow waters.  This idea was developed by Captain John Schank originally for use in the Great Lakes in the American War of Independence.  In 1798, Schank was a member of the Transport Board, a committee which ran much of the navy.  When Phillip Gidley King was in England prior to taking up his appointment as Governor of New South Wales, he arranged for the Lady Nelson to be allocated for use in exploration of “New Holland and had her rigged as a brig as this would make her easier to sail.  Her commission was”

for the purpose of prosecuting the discovery and survey of the unknown parts of the coast of New Holland, and ascertaining, as far as is practicable, the hydrography of that part of the globe.

Her first Commander was Lt James Grant, a Scot selected by Schank.  She left London in January 1800 and sailed for Portsmouth where she took on equipment and provisions ordered by King and four extra guns.  The ship was so low in the water that many of the crew considered her unsafe for such a long voyage.  The carpenter and another man absconded on Portsmouth and were not replaced.  She set sail with a convoy headed for the east but was much slower and taken in tow.  Grant let go the tow in bad weather and sailed on successfully to the Cape Verde Islands.  There he took on water and provisions but still experienced unrest among the crew.  Two absconded but were captured by the Portuguese authorities and the second mate, a source of discontent was imprisoned pending repatriation to England.  Two Portuguese added to the crew.

The Lady Nelson reached Cape Town and in June 1800 and stayed until October.  After she had left England, news had reached the government that Bass had sailed around Van Diemen’s Land (Tasmania) proving the existence of a strait.  Orders were sent from the Duke of Portand to Cape Town for Grant to:

sail through the said strait on your way to Port Jackson, by which means you will not only shorten your voyage, but will have an opportunity of more minutely surveying the said strait.

Grant reached the Australian coast in December 1800 near the present day Victoria – South Australia border.  He named many of the features he charted: Mount Gambier, Mount Schank, Portland Bay, Cape Otway and arrived in Port Jackson (Sydney Cove) on 16 December 1800.

Grant was reappointed to command the Lady Nelson and ordered to complete the exploration of Bass Straight.  He set sail with a largely convict crew with John Murray as mate, four soldiers of the New South Wales Corps as a guard and Ensign Francis Barrallier, also of the New South Wales Corps, as surveyor for the expedition.  In addition there was George Caley, a botanist sent by Sir Joseph Banks to collect plants, John Lewin, a naturalist and artist, and an aborigine named Euranabie and his wife Worogan.

The Lady Nelson sailed through Jervis Bay, past Wilson’s Promontory to Westernport.  Passing Phillip island (which he named Snapper Island) he selected Churchill Island as a base and order land to be cleared.  He named the island after a Devonshire farmer who had donated some of the seeds.  He recorded:

The ground was now prepared and I sowed my several sorts of seeds, wheat, Indian corn, and peas, some grains of rice and some coffee berries; and I did not forget to plant potatoes.  With the trunks of the trees I felled I raised a block house of 24 feet by 12 which will probably remain some years, the supporters being well fixed in the earth.

Grant was very impressed by Churchill Island and commented:

“I scarcely know a place I should sooner call mine than this little island.”

And he also tells how he planted the stones of fruit trees round the hut, which his men had built there:

Building the blockhouse and planting the garden was a demonstration that Britain had taken possession of that land.  Grant never returned to the island he named but, after a voyage to Norfolk Island, the Lady Nelson returned to Westernport in December that year under the command of John Murray as Acting Lieutenant.

A.M. I went in the gig to Churchill’s Island and there found everything as we left it–I mean the remains of our fires and huts; the wheat and corn that Lieutenant Grant had sown in April last was in full vigour, 6 ft. high and almost ripe–the onions also were grown into seed; the potatoes have disappeared–I fancy that the different animals that inhabit the island must have eaten or otherwise destroyed them.  I regret not having time or men to spare to clear a large spot and sow the wheat already grown, as the next crop would be large.  I never saw finer wheat or corn in my life, the straw being very near as large as young sugar-cane.

His men captured some swans for meat and so he:

sent the second mate to Churchill’s Island to cut down the wheat on purpose to feed the young swans with it, at sundown they returned on board with it in the whole perhaps a bushel in quantity with a good deal mixed with oats and barley all fine of their kind–some potatoes were also found and 2 onions.

Murray sailed on to King Island where he discovered elephant seals and made several gallons of oil as a specimen for the government.  He also harvested mutton birds to feed the crew.

Murray sailed on into Port Phillip bay, the first ship to enter sand chart the bay.

The Lady Nelson acted as a tender to the much large Investigator, captained by Matthew Finders.  The smaller boat was able to explore shallow water and sail closer to shore.  Flinders explored the Queensland coast and Barrier Reef as far as the Cumberland Islands, north east of Mackay before sending the lady Nelson back to Sydney with letters.

In these years, the Lady Nelson played a significant role in communications and settlement.  She transferred convicts from Norfolk Island to Hobart, helped settle Hobart and the Derwent, sailed to New Zealand and evacuated the short-lived Corinella settlement in Victoria.

In 1801, Governor Bligh ordered her dismantled and laid up.  On the arrival of Governor Macquarie, she was returned to service and used to transport governors to inspect settlements in Van Diemen’s Land (Tasmania).

In 1819 she was damaged while establishing a settlement a Port Macquarie but repaired.

Demise of the Lady Nelson

In 1824 the government decided to establish settlements around Melville and Bathurst islands.  The Lady Nelson was used to procure provisions from neighbouring islands.  She was captured by “pirates” or natives on the island of Baba, east of Timor and burned in 1825.  Most of the crew were killed but two were enslaved.  One of these, Forbes, was rescued by Captain Watson of the schooner Essington in 1839.

Ida Lee, (1915) The Logbooks of the Lady Nelson, gutenberg.net.au

FOCIS member and historian Christine Grayden kicked off the "History of the Friends of Churchill Island Society" project today with assistance from helper Heather. First thing - sort 42 years of newsletters x 4 editions per year, into chronological order! They're finding the newsletters are chock a block full of interesting information and illustrations, and can't wait to get stuck into the research. Thanks Heather and Christine! ... See MoreSee Less

FOCIS volunteer Jeff Cole and his trusty offsiders Tim and Clive have almost got the dray rebuilt to a stage when it can actually be wheeled out of Amess barn! Last Friday Jeff and Tim did a power of work, as Jeff reports:

“Tim and I had a welcome visit from FOCIS president Graeme Clauscen on Friday to review progress. At the time the dray was deconstructed because I had installed the shafts upside down and forgotten to fit the main cross member! However, by the end of the day the axle assembly was fully fitted, the shafts and main cross-member fitted, all permanently fitted metalwork and woodwork oiled or painted. On Monday Tim will drill a series of holes and bolt on timbers to complete tipping- tub base frame.
> Peter the blacksmith has made 6 travelling hooks for the shaft fittings and is continuing. A tad of adjustment in the woodwork/metalwork fit still to be completed. Original metalwork will be painted cream, new metalwork black..
> We could actually roll this chassis out but the weather was inclement so we retired to the cafe for coffee whilst glue dried!”

There is still lots of work to do on the dray yet. You can watch Jeff, Tim and Clive in action working on the dray each Friday on Churchill Island. You can also view an image gallery of progress on the FOCIS website here: focis.org.au/tipping-dray-restoration-project/ ... See MoreSee Less

Harry Jenkins, owner of Churchill Island from 1936 until his death in 1963, was a well-known adventurer. One of his most ambitious adventuring undertakings was with his friend (also a well-known adventurer) Harold Jeffery, Governing Director of Dimmey’s Model Stores and Chairman of Directors at George’s department store until his death in 1945. The 2 friends made an amazing flight from England to Australia in a tiny plane from 28 December 1931 arriving in Darwin on 11 February 1932. Harold made a film during the flight, but so far we are unable to trace it. However, according to the book “Dimmey’s of Richmond: the rise and fall of a family business” by Samuel Furphy, it does include footage of “a fascinating scene... Involving a meeting with an Indian Raja. When the dignitary fell ill, Jeffery and Jenkins flew him to a nearby hospital for treatment.” In return the Raja gave them “all sorts of gifts and took them on tiger hunts and rides on elephants. He obviously fêted them.” p.48. Here is a photo of Harry (at right) and Harold consulting with an official during the flight, from the book p.47. You can read more about Harry Jenkins the adventurer in an essay written by FOCIS member David Maunders here focis.org.au/about-churchill-island/harry-jenkins-biography/ ... See MoreSee Less

"We are pleased to advise that Churchill Island will be one of the 16 regional Victorian businesses participating in the Vaccinated Economy Trial taking place over the next two weeks.

We will be opening our doors on Friday, Saturday, and Sunday over the weekends of 15-17 October, and 22-24 October, approximately two weeks before Victoria is expected to reach the 70 percent double dose vaccination threshold.

This means that all visitors, staff, and volunteers (16 years and over) to Churchill Island during these two weekends of the trial must be double vaccinated, and must be able to provide evidence of their vaccination status, or a medical exemption.

Visitors can prove they are fully vaccinated on completion of a Service Victoria QR check-in that includes vaccination information; a COVID-19 digital certificate displayed through the Medicare App, Service Victoria App or equivalent smartphone wallet; a printed version of the COVID-19 digital certificate or immunisation history statement accessed via myGov to download and print or as provided by your vaccination provider, medical practitioner or the Australian Immunisation Register; or their exemption from COVID-19 vaccination as demonstrated by a valid, original letter from a medical practice.

The purpose of the trial is to gain a more detailed understanding of the operational barriers and enablers, which will help inform the settings required for Victorian businesses to operate in a COVIDSafe way when the state re-opens more broadly under the Roadmap to Deliver the National Plan.

We thank everyone for their support and understanding as we work with the State Government to help open up our community and state in a safe manner." ... See MoreSee Less