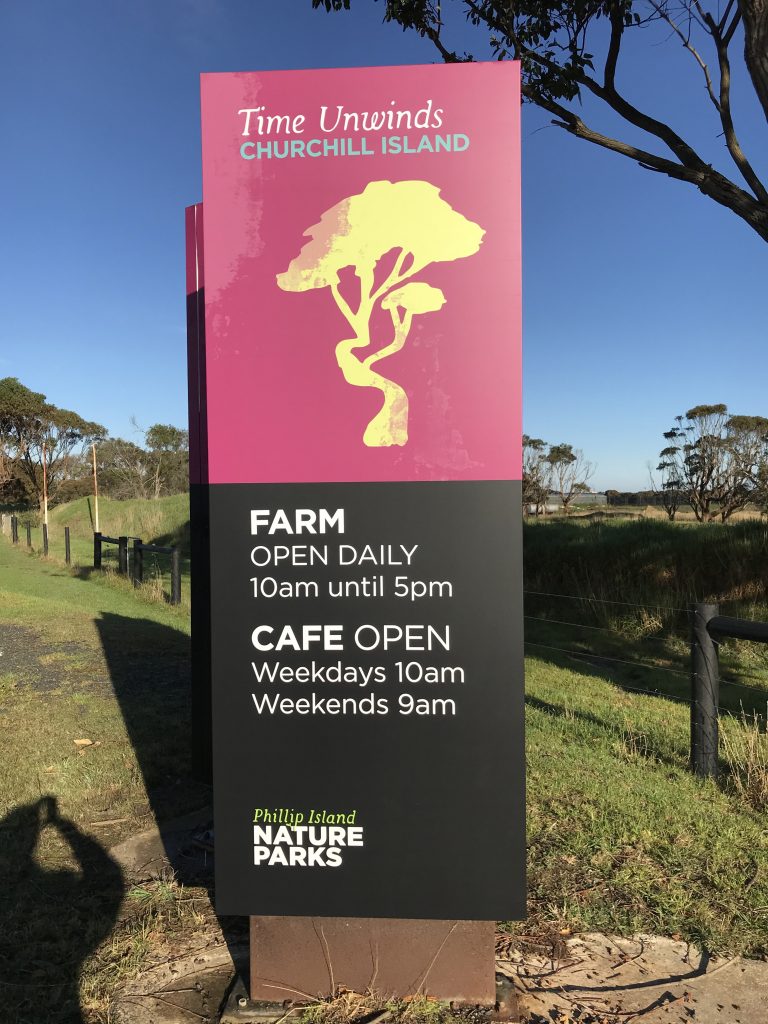 Photos of the New Signs for Churchill Island.

Back in 1990s and 2000s we used to have garden and seasonal festivals on Churchill Island. Some of our Facebook followers may remember attending some of these. Churchill Island managers, Phillip Island Nature Parks, will soon be saying farewell to research manager Peter Dann, who is retiring after 42 years of researching Phillip Island’s Little Penguins, guiding other research and mentoring probably hundreds of students! Regulars on Churchill Island will know farm worker and demonstrator Chloe, who is Peter and Morag’s daughter. One of our FOCIS members was asked if they had any photos of Peter from over the years. While going through scrapbooks of newspaper cuttings, they located a number of Churchill Island articles, including one about a garden festival where this beautiful blacksmith-created Lily sculpture was being raffled. At that stage Ben Clark, pictured, was the ranger here, and he was very talented at ‘olden days’ crafts, including blacksmithing. He created the lilies especially for the event. I wonder who the lucky person was whose raffle ticket won this beautiful creation?! ... See MoreSee Less

Friends of Churchill Island Society Restoration volunteer Jeff Cole has been beavering away at the much-loved small Clydesdale sculpture which used to be located north of the visitors centre. The horse was created by chainsaw sculptor Dean Smith dancing bear at an early Churchill Island working horse Festival as an art demonstration peace. He used one of the old cypress trees which had fallen or had to be removed for safety reasons. Some of the cypress trees had Cyrex wasp infestation when the island was purchased by the government in the 1970s, and had to be removed. Over the years, despite attempted preventative oiling, the sculpture deteriorated. During the Covid lockdown when no one could go to attend to it, the ants invaded! They created quite a mess of one side of the horse and the base. It’s been a big restoration job on Jeff’s part, but now coming together.
Photos from Jeff show the horse with a block inserted to replace existing fault in timber and large ants’ nest problem, and awaiting sculpting. Second image shows horse oiled with special preserving oil, and removed from rotting base. The horse will now be kept under cover in Pedro’s shed. ... See MoreSee Less

Friends of Churchill Island Society secretary Leah Tempany sent this report today about a particularly hilarious working sheep dog demonstration on Churchill Island yesterday, that did not quite go according to plan! Leah writes "Warwick, Daniel & I spent some time yesterday sighting, photographing and annotating moveable objects.
For many years one of our family's favourite things to do on CI has been to watch the working dog show.
Alice (farm worker) and the island's Border Collie dog Billy presented with 2 orphaned lambs, Hansel & Gretel, who were sticking close to Alice, their adoptive mum. Joe and Alfie the miniature donkeys were temporarily in the paddock.
Well, Joe donkey had some kind of beef with Billy and it made for a hilarious show. Most of the performance was Joe having Billy on the run! Alice locked Joe behind a gate, but it wasn’t long before Joe had the gate open and Billy scooted behind Alice again.
With the price of working dogs these days, Joe was making Billy work for his supper yesterday!"
Click on the photos to see Joe running up to 'play' with Billy, while Billy retreats behind Alice! That would have made for a memorable working dog demonstration LOL! ... See MoreSee Less

Speaking of Amess House being 150 years old, FOCIS would like to congratulate the wonderful Phyllis Murphy, who was awarded and Order of Australia Medal in the Queen's Birthday Honors list. Phyllis was vital in advising the Churchill Island historic buildings restoration project co-ordinator Sally O'Neil in 2000. Phyllis was an award winning architect who developed a passion for authentic restoration of interiors of Victorian and Edwardian buildings. Her specialty was wallpapers from the era, and she was responsible for selecting/devising the authentic wall and ceiling papers used throughout Amess House. Copy this link into your browser to watch a video of Phyllis explaining her deep interest from Youtube:

Given that Churchill Island's Amess House and the "Homestead tree" – a gift to Samuel and Jane Amess by Ferdinand von Mueller – are 150 years old this year, FOCIS members may be interested in the forthcoming Phillip Island & District Historical Society's General Meeting coming up on Thursday 16th June to be held at the Phillip Island RSL, corner of Thompson Avenue and Cowes-Rhyll Road, Cowes. Plenty of parking. Join them for lunch in the bistro at 12 noon, then move to the Anzac Room for a talk by member Maureen Matthews about Euphemia Henderson. Euphemia was the sister of Georgiana McHaffie, who was married to John David McHaffie, original European settler on Phillip Island. Euphemia was at one stage engaged to Ferdinand von Mueller, first director of the Royal Botanical Gardens in Melbourne and founder of the National Herbarium there. Von Mueller was an extraordinary botanist whose early ramblings on foot or horseback throughout Victoria and South Australia, and meticulous specimen and recordkeeping, forms the backbone of much of what we know of South Eastern Australia’s rich botanical heritage. Various women collected botanical specimens of all sorts for von Mueller, including Euphemia who was also renowned for her beautiful wildflower paintings.
All welcome. You don’t need to be a member of the historical Society to attend the meeting, but everyone attending needs to RSVP as soon as possible to the Treasurer, Judy Gittus, by emailing:
Images show Euphemia, an example of her botanical floral art, and a photo from the Australian National Botanic Gardens of Ferdinand von Mueller at about the age at which he and Euphemia were engaged. ... See MoreSee Less