This work contains much historical data but its structure and layout, focused on locations, makes it difficult to follow.

In general, it appears that the Australian Army had few dentists in the early years of World Wart 1, and some of these were not recruited on account of their qualifications.

By the end of 1916, there were 72 dental officers serving overseas with a further 8 in Australia ready to embark.

At the beginning of 1916, there were only five Australian dentists working in the UK with the AIF. Later that year, 10 units, each with a dental officer, were deployed from Egypt and five units were in Etaples, France.  The base here, with men coming from the trenches for treatment and reinforcements from England was a “mass of dental unfits” (p.57).

By February 1917, dental officers were given the power to ask for men to be paraded for dental examinations and no man was allowed to proceed overseas unless dentally fit (p.47).  Dental services were still poorly coordinated and under resourced.  We may assume that around July 1917, someone noticed that Harry Jenkins was a qualified dentist and had him moved to the Medical Corps to in a small way help to increase resources.

There are eight references to Jenkins in Kuusk’s history. I have also included information from Jenkins’ war records.

In 1917, (from 22/7/17) he is recorded at the Command Depot, Wareham with the 88 Dental Unit. The Command Depot was for training recruits. Dental units were to bring troops to an adequate standard of dental fitness prior to serving in France.(p.60).

Jenkins seems to have served in Command Depot No 4 at Perham Downs and Parkhouse (Salisbury Plain) until he proceeded overseas to Havre on 31/5 1918. (Jenkins war records). He was on the strength of the 59 Dental Unit (9/6/18) according to his war record. 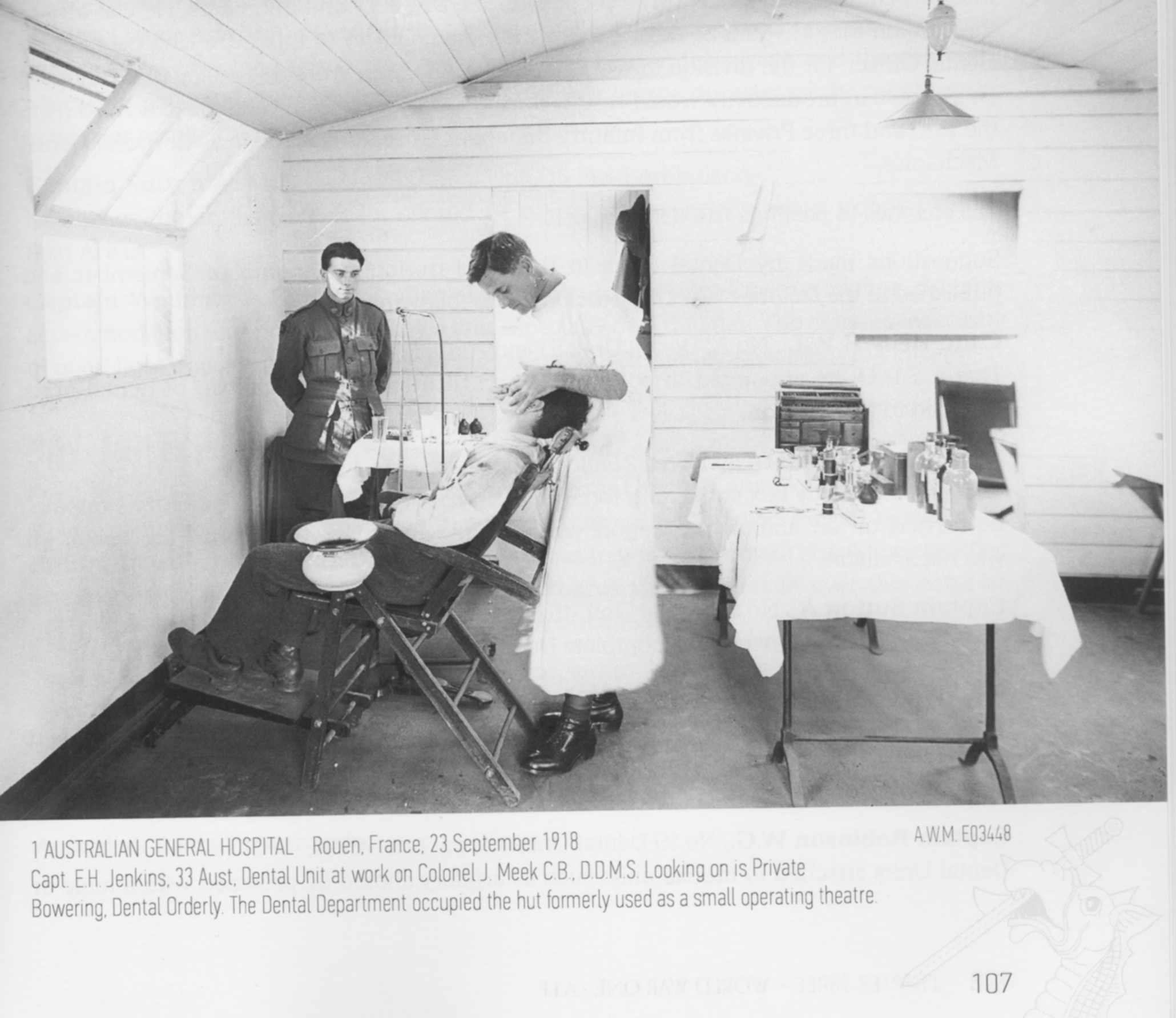 Conditions or fitness of members of the BEF were so poor that when a serious dental disability occurred, it necessitated evacuation from the unit to hospital. Any conservative treatment was generally impossible.

Jenkins was serving in Rouen at the Australian General Hospital , 33 Dental Unit, on 23 September 1918, with a photograph (above). .

On 7/3/19 he was given leave to go to Italy and then became ill with mumps. He returned to Melbourne on 5/9/19 and was discharged shortly after.

Our new Clydesdale, Charlie, arrives at Churchill Island tomorrow. Not sure exactly what time, but expect around 11 am. Come and join the reception party. If you cannot, come to the general meeting on Saturday at 1.30 and introduce yourself beforehand. We have a talk on the building restoration project due to start this year. Meeting in the visitors centre, Charlie probably in the farmyard. ... See MoreSee Less

The next FOCIS General Meeting will be held on Saturday, 11 February, 1.30 pm when Jarvis Weston from PINP will tell us about the building restoration project due to start this year. This is funded by a $198,000 heritage grant.

In the meantime, Nature Park rangers are organising:

Old Fashioned Games on the Lawn - Join our rangers for some fun games like sack races, banksia seed and spoon race, quoits and more.

Excellent that the Victorian govt is funding this building restoration work. CI's historic buildings are the only 19th century buildings open 365 days per year to the public this side of Melbourne. They are in very good condition and need to be kept that way, given how rare examples of this built heritage are in our area. Sounds like a fascinating talk. Jarvis is very experienced at this sort of project management and 'knows his stuff'.

A landmark meeting today between the restoration group and Nature Park (Pete, Helen and Rod). Jeff Cole represented FOCIS and Tim the restoration volunteers. Agreement was reached on the operation of the group and projects, including the what wagon and cannon carriage. We appreciate the increased support and commitment from Nature Park and look forward to more restoration outcomes. ... See MoreSee Less

On Tuesday, our curator Andrea and FOCIS member and volunteer guide Karen spent a few hours selecting some lace items to show to residents at Banfields Aged Care. Three items were selected, a chemise, collar and dickie ( front piece). The lace has not been displayed before and some time was spent in clarifying the form of lace ( limerick) and it’s origin. The names of the Amess women who owned the lace are:
Jane Amess (nee Straughan) – donor Unity’s great grandmother. Jane was the wife of Samuel Amess, first Samuel Amess to own Churchill Island.
Frances Amess (nee Turnbull) – grandmother, married Robert Lisle Straughan Amess, 4th child of Samuel and Jane
Janet Jickell (nee Amess) – mother, 2nd of two children of Robert and Francis, married James Jickell
Unity Mary Bright (nee Jickell) was the donor, 2nd of two children of Robert and Francis.

Thank you so much for visiting us at Banfields. The feedback was fantastic.

Good on you. Well done. Great to see volunteering can happen again. Keep up the graft work. History is so important.

Good to see the lace being shown again. The residents would have loved it. Just to clarify, there is quite a bit of detail about the lace pieces on their catalogue files. As curator I did a major display of this lace for an PINP Open Day, and it gathered a lot of interest. I have also used it in several talks at historical society, nursing homes, and a FOCIS GM. Years ago Patricia Baird and I took the whole collection up to the NGV for their textile curator to go through for us, then I took it to the Victorian Embroiderers' Guild for their lace group to run their magnifying glasses over. It was a fascinating day there because they had big archival drawers full of reference lace to help work out what was what for Kel's collection. PINP p/t receptionist Lyn Blom also did research work on the collection during lockdown. When I was first sorting it about 2012, I had nowhere to sort it and spread it out to archive it into acid free tissue, so my daughter PINP volunteer Karen Eddy and I booked the board room at the Penguin Parade and used the big table in there. While it was all spread out I invited many of the staff to come in and look, which they did. It is a wonderful collection. Let's hope we can some day have an appropriate display area to have pieces on display on rotation.

How wonderful Karen, l know you must be in your elect there.

The volunteers’ hut in the Churchill Island farmyard recently suffered a collapse of the facade. Built over 30 years ago by FOCIS to accommodate volunteers staying overnight on working bees, the hut now houses the museum archives and records. Thanks to Pete Officer and PI Nature Park for promptly arranging repairs. ... See MoreSee Less

That building was my office for 15 months as I catalogued 4500 odd historic archives. All 27 photo albums worth were found in that office in a multitude of boxes somewhere in Nature Parks various building or had been donated to FOCIS. Lin Starke