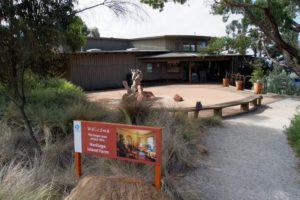 Here is a message from Phillip Island Nature Parks about visiting their venues for the following two Friday-Sunday periods:
“We are pleased to advise that Churchill Island will be one of the 16 regional Victorian businesses participating in the Vaccinated Economy Trial taking place over the next two weeks.
We will be opening our doors on Friday, Saturday, and Sunday over the weekends of 15-17 October, and 22-24 October, approximately two weeks before Victoria is expected to reach the 70 percent double dose vaccination threshold.
This means that all visitors, staff, and volunteers (16 years and over) to Churchill Island during these two weekends of the trial must be double vaccinated, and must be able to provide evidence of their vaccination status, or a medical exemption.
Visitors can prove they are fully vaccinated on completion of a Service Victoria QR check-in that includes vaccination information; a COVID-19 digital certificate displayed through the Medicare App, Service Victoria App or equivalent smartphone wallet; a printed version of the COVID-19 digital certificate or immunisation history statement accessed via myGov to download and print or as provided by your vaccination provider, medical practitioner or the Australian Immunisation Register; or their exemption from COVID-19 vaccination as demonstrated by a valid, original letter from a medical practice.
The purpose of the trial is to gain a more detailed understanding of the operational barriers and enablers, which will help inform the settings required for Victorian businesses to operate in a COVIDSafe way when the state re-opens more broadly under the Roadmap to Deliver the National Plan.
We thank everyone for their support and understanding as we work with the State Government to help open up our community and state in a safe manner.”

During the time of Victoria Conservation Trust management of Churchill Island they received a grant in 1981 to “preserve a vintage farm craft”. A local contractor was employed to demonstrate the working of timber and creating a post and rail fence on the east and west sides of the garden. Many festival goers that year watched the 2 men who did the work in action. Unfortunately the wood was quite green and sappy and the fence barely lasted 15 years, so has long gone. However, these photos from the Holman family capture the men employing the various processes of making the fence – not a power tool in sight! Quite a few examples of the tools employed on this project can be viewed at the timber working tool display at the Blacksmiths shed on CI, put together by FOCIS members Jeff Cole and Christine Grayden, with a donation by FOCIS Honorary Member Wilfred Dungan, whose cross-cut saws are part of the display. ... See MoreSee Less

FOCIS member and historian Christine Grayden kicked off the "History of the Friends of Churchill Island Society" project today with assistance from helper Heather. First thing - sort 42 years of newsletters x 4 editions per year, into chronological order! They're finding the newsletters are chock a block full of interesting information and illustrations, and can't wait to get stuck into the research. Thanks Heather and Christine! ... See MoreSee Less

FOCIS volunteer Jeff Cole and his trusty offsiders Tim and Clive have almost got the dray rebuilt to a stage when it can actually be wheeled out of Amess barn! Last Friday Jeff and Tim did a power of work, as Jeff reports:

“Tim and I had a welcome visit from FOCIS president Graeme Clauscen on Friday to review progress. At the time the dray was deconstructed because I had installed the shafts upside down and forgotten to fit the main cross member! However, by the end of the day the axle assembly was fully fitted, the shafts and main cross-member fitted, all permanently fitted metalwork and woodwork oiled or painted. On Monday Tim will drill a series of holes and bolt on timbers to complete tipping- tub base frame.
> Peter the blacksmith has made 6 travelling hooks for the shaft fittings and is continuing. A tad of adjustment in the woodwork/metalwork fit still to be completed. Original metalwork will be painted cream, new metalwork black..
> We could actually roll this chassis out but the weather was inclement so we retired to the cafe for coffee whilst glue dried!”

There is still lots of work to do on the dray yet. You can watch Jeff, Tim and Clive in action working on the dray each Friday on Churchill Island. You can also view an image gallery of progress on the FOCIS website here: focis.org.au/tipping-dray-restoration-project/ ... See MoreSee Less

Harry Jenkins, owner of Churchill Island from 1936 until his death in 1963, was a well-known adventurer. One of his most ambitious adventuring undertakings was with his friend (also a well-known adventurer) Harold Jeffery, Governing Director of Dimmey’s Model Stores and Chairman of Directors at George’s department store until his death in 1945. The 2 friends made an amazing flight from England to Australia in a tiny plane from 28 December 1931 arriving in Darwin on 11 February 1932. Harold made a film during the flight, but so far we are unable to trace it. However, according to the book “Dimmey’s of Richmond: the rise and fall of a family business” by Samuel Furphy, it does include footage of “a fascinating scene... Involving a meeting with an Indian Raja. When the dignitary fell ill, Jeffery and Jenkins flew him to a nearby hospital for treatment.” In return the Raja gave them “all sorts of gifts and took them on tiger hunts and rides on elephants. He obviously fêted them.” p.48. Here is a photo of Harry (at right) and Harold consulting with an official during the flight, from the book p.47. You can read more about Harry Jenkins the adventurer in an essay written by FOCIS member David Maunders here focis.org.au/about-churchill-island/harry-jenkins-biography/ ... See MoreSee Less